There are a LOT of Toyota vehicles on the road today. Needing a spare key or losing your last key is inevitable, and when that need arises most people think that the dealer is their only option. Don’t feel forced to pay outrageous dealer prices, give us a call!  We can get you that spare key, smart key or even get you new keys if you have lost your last one for LESS than dealer costs.

Starting in 1998 Toyota began using transponder chip technology to make their cars more secure.  Two things resulted from this, cars were way harder to steal and replacement keys got more expensive.  Our keys are extremely affordable, there is no reason to not have a spare key made as soon as possible!

Early Toyota vehicles equipped with transponder chip technology did not allow keys to be added or deleted from the computer by the way of standard diagnostic machinery (as most all other vehicles do). What this means is that if you have lost your LAST key to one of these vehicles, you have to either replace the Engine Control Computer (the part in the car that stores the key database) or have the Engine Control reflashed. Reflashing in computer terms means that we over-write the current data on the computer chip with virgin (un-used) data.  Think of this as a re-set, like when you format your home computer’s hard drive.

If you drive one of the vehicles below and have lost your last key it must be reflashed. If you still have a master key to the vehicle, we can easily add in a new key for you for a very affordable price.  If the last key you have is a Valet (a key that will start the engine but will not open the trunk or glove box) we can clone that key for you easily.

If you have a factory Toyota key (or one of ours too) you can usually tell if your key is equipped with a transponder visually by looking at it. Look at the blade of the key up towards the large black or gray plastic head.  On 1 of the sides you will likely see a little dot or dimple stamped on the blade. Also if your key is marked with a ‘G’ or an ‘H’ it is also equipped.  Early model Toyotas with transponders (like many of the ones listed above) had no markings at all on the key. 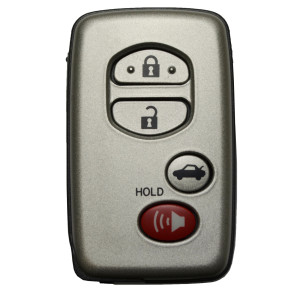 Toyota vehicles in the early to mid 00’s began using smart keys.  These types of keys allow you to keep the key fob in your pocket or purse and press a button to start the engine.  We can program in spare smart keys for you for an extremely affordable price.  As there isn’t currently a huge demand for these keys we order them on a customer by customer basis.

A special note on eBay keys and other cheap keys found online.

eBay is filled to the brim with extremely cheap keys that say they are in ‘New’ condition. These keys are 99.9999999% of the time used,  but in a new shell. We will attempt to program in the keys you supply but just know that any smart keys brought to us supplied by a third party that is not still in dealership packaging will be higher to program.  This is due to the fact that used keys require us to reset your car’s computer.  This process takes anywhere from about 15 – 30 minutes to do.