Have you lost your last key or simply need a spare key made to your Jaguar?  If so, you are likely having a hard time finding a locksmith willing or able to make the key or program it.  The most common scenario is calling half a dozen locksmith shops only to get a referral to another company or to a local (or not so local) dealer.  Fear not!  We can make you fresh keys to your Jaguar for way less than the dealer!  Don’t feel pressured to pay insane prices for a spare key, give us a call. 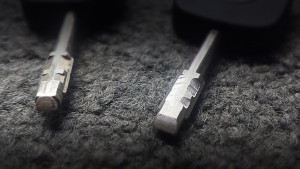 Jaguar keys are pretty different looking. A lot of customers call them ‘post keys’ for some reason, but the real name is called ‘tibbe keys’.  They’re cut on 4 different sides and require a specialty machine to make them!  We specialize in cutting Jaguar tibbe keys.

Starting in about 1990 Jaguar moved away from a standard key that any locksmith can cut and started using these tibbe keys.  The first generation of these keys had 8 cuts and then moved to a 6 cut design. 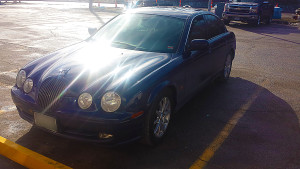 Starting in 1998 Jaguar began using transponder chip technology in their keys.  Chip keys have to be enrolled into your car’s computer database before it will start.  We specialize in programming these keys, these are NOT dealer only!

Note: We need the car at our shop in Kansas City, Missouri for us to help you.