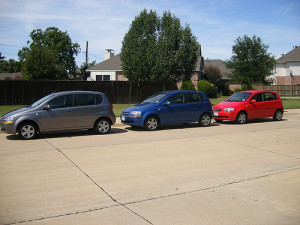 The common story we hear most often about the Chevrolet Aveo is that customers have issues finding someone to make them keys. Even the dealership has given many of our customers the wrong information about which key they need! The Chevrolet Aveo isn’t your typical American Chevy, it’s on a Korean platform. If you’ve lost the last key to your Chevrolet Aveo you’ll find out very quickly by calling around that sometimes they have chips in the keys and sometimes they do not. If your car has a chip in the key, most equipment that locksmiths carry can’t program it. It really requires a dealer tool to program. Since there is a 50/50 chance of the locksmith not being able to complete the job, most won’t want to start.

Want to know a secret about the Chevrolet Aveo?

Here is another reason to save our number in your phone. The Chevrolet Aveo shows that there is an option for a transponder chip because Chevy produces it for two national markets. The Canadian market has a chip in the key because there is a mandate in Canada that all cars must have transponders after a certain year. However, in the U.S. market the Chevrolet Aveo doesn’t have a chip. So, the only reason to worry about getting a spare key to your car is the somewhat rare (but not entirely unheard of) chance that it is a Canadian model.

If you’ve lost your last key to your Chevrolet Aveo we can get you back on the road. Even in the rare event that you have a chipped model, we can program the earlier models (2004 – 2008).

Do you drive a Pontiac G3 (Pontiac Wave)?

The 2009 -2010 Pontiac G3 is the Pontiac equivalent of the Chevrolet Aveo. The car was produced for a couple of years and has the exact same keys and locks. The article above applies to the Pontiac G3 (Pontiac Wave in Canada) as well.