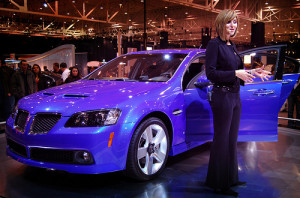 The Pontiac G8 was a cool car that was only made from 2008 to 2009. If you own a Pontiac G8 and have tried to replace a key you might find it to be more of a difficult task than you had previously thought. In fact most places will refer you to the dealer to make this key because it has a very un-common laser cut (sidewinder) key. This particular key is only used on the 2008 – 2009 Pontiac G8 and the much newer Chevrolet Caprice which is only sold to the Police department (at the time of writing).

We have the keys to your Pontiac G8 in stock and we can cut them to meet or exceed the original equipment manufacturer’s (OEM) specifications. We can also program the transponder chip too. If you have lost all of the keys to your Pontiac G8 we can make and program fresh keys and get you back on the road! Some things our customers do to save on cost is to run the VIN at the dealer and get the key code. With the key code we can cut you keys for the cheapest price. The key code will be anything in a series of numbers starting with 60000 and ending with 62113. Have any more questions? Give us a call during regular business hours. (816) 454-2552